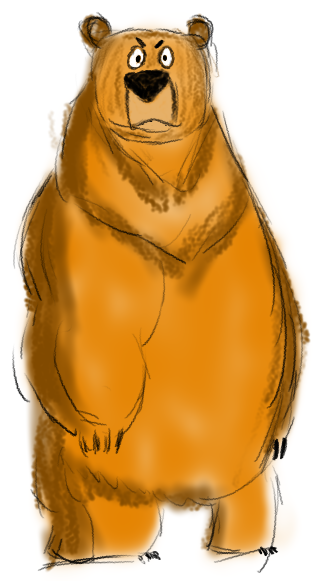 Normally I don’t remember my dreams, but last night a funny one (in a dark humour kind of way) stuck in my mind.

It involved me, my wife and son (1-year-old toddler) barricading against an impending attack… by walking talking animals. A damn Bear was always the first to show up, followed by a rabid rabbit, and then the rest of the mob.

I had to get my family into safety, through the greenhouse and up to the roof in the back, out of reach from the animals. Another ridiculous thing was the situation would reset if I failed to take us to safety, so I could try again.

Tired of the conundrum, third time around I asked my wife to go ahead without me, while I stayed back to hold my ground. I grabbed a sword (Of course I have a sword around just in case).

I wait for the damn Bear in the kill zone…

Like clockwork, Bear goes in. I stab him in the eyes.
While the Bear throws himself to the ground in agony screaming about his cock-up, the rabid rabbit comes in charging. I stab the bastard, grab him by the legs, and slap the Bear around with it, saying…
“How do you like that mothafocka?”

Then I woke up.
Mission accomplished I guess!

NOTE 1: The rest of the mob didn’t even show up after what happened to the Bear and Rabbit.
NOTE 2: I actually had this dream.

Maybe next dream will have Putin as boss. 😉

0
Reply
Support me for more articles