If you looked at my previous posts, you noticed I explored some of the nice things Boost Asio gives you, and how I implemented my own version.

I covered what I called callstack markers, which has more uses than it looks on the surface. Also covered strands, and why they are such a nice concept.

This time around, I’m going to focus on the equivalent of boost::timer::deadline_timer. The implementation shown here is custom made, portable C++11 and self contained.

If I had to roughly describe what deadline_timer is for while at the same time hinting at the implementation, I would say “deadline_timer allows you group together a bunch of handlers to be called when a timer expires“.
I think the “deadline” in deadline_timer is a bit misleading. With the definition of “deadline” being “the latest time or date by which something should be completed“, the first thing that crosses my mind is that it is used to cancel some operation that did not complete by the specified time/date. Such has to cancel a connect attempt. Certainly it can, but can be used for a lot more.
For simplicity, I’ll be calling it “timer(s)”, and not “deadline timer(s)”

A bit of brainstorming

So, how do we go about implementing timers?
At its core, you need a queue for the timers, and a worker thread that dequeues and executes timers according to the specified expiry times/dates. Lets call it “Timer Queue”. Win32 API uses the same name for such a thing: Timer Queues
What I explore in this post is a Timer Queue implementation. It allows one-shot timers. Higher level things such as grouping handlers in one timer and timers that can be reused (like boost Asio’s own implementation), can be built on top.

The trickiest thing to solve is how to correctly notify the worker thread that something happened that might change the current wait time.

Now, if you throw in a couple more threads adding or cancelling timers, things might get confusing. Personally, I think it’s a bad sign if to verify correctness of your multithreaded code you have to think too hard. Sure, performance is good, but first get it right. If performance is a problem, profile it, then think as hard as you need to get it right and fast.

My first pass at this was convoluted to say the least. There was a queue for the timers, then communication with the worker thread was done with another queue where I would pass commands such as “recalculate wait time”, or “execute this timer right now”, or “shutdown”.
To add insult to injury, those two queues were locked independently.
Sure enough, as I started to write this post to share the code, I’ve spotted another bug. Ever had that feeling of “Surely there must be a cleaner way to do this” ?

To be honest, in hindsight that first pass was quite bad. Maybe it just got that bad in small increments as I was focusing on the wrong problems.

What was sabotaging my efforts was that I was in the wrong mindset. I kept thinking off the thread-to-thread communication as “work to be done“, and thus the obvious choice there was to have a command queue.

After a moment of clarity, I changed my mindset from “work to be done” to “something has changed“, and a cleaner solution formed: 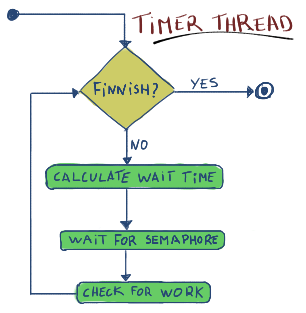 The only helper class needed is a semaphore, which can be implemented in portable C++11 with a mutex, a condition_variable and a counter.

A few more useful methods could be added to Semaphore, but were omitted to keep it short.

And a small example just adding and cancelling timers…

The output will be this (with varying *Elapsed” values)…

Main objective with this implementation was to have a small, self-contained and portable implementation. Therefore a few things can be improved if performance is a problem:

Although TimerQueue is useful as-is, if you are familiar with Boost’s Asio deadline_timer, you will spot a couple of differences:

A close match to Boost Asio deadline_timer can be implemented on top of TimerQueue by having a Timer class that aggregates handlers, and puts a one-off timer on TimerQueue whenever we set an expiry time. That one-off timer will run any handlers the Timer instance owns. Even more, instead of executing the handlers in the TimerQueue thread, Timer can forward execution of the handlers to another object, thus giving the application control when/where to execute the handlers.

While writing this, I took a quick look at how Boost’s Asio’s implements deadline timers (on Windows), to see if it was significantly different. Particularly, I was curious how deadline_timer is tied to io_service. If there is another thread involved for triggering timer related things, or if somehow everything was controlled by Windows Completion Ports.
From my short study of the beast’s guts, it seems it uses a somewhat similar method:

Feel free to comment with corrections, suggestions, or ask me to cover other areas.

The source code in this article is licensed under the CC0 license, so feel free to copy, modify, share, do whatever you want with it.
No attribution is required, but I’ll be happy if you do.

I tried out your timer queue implementation on OS-X and think I found a bug:

the cancelled timers will fire again later, because it seems the original handler is not set to nullptr automatically with

If I set item.handler to nullptr, everything works fine for me. Btw, what is the exact license of your code above ?

Hi Daniel,
I’ll take a look at that bug later today and update it if necessary. Many thanks for the heads up. 🙂
The license, yes, good point. I should start putting a note at the end of articles with considerable code. I’ll have to check the best license, but I’ll go for something quite permissive. I’d say most of the snippets in these articles will be some version of Common Creatives, maybe https://creativecommons.org/publicdomain/zero/1.0/
Although no attribution required with that one license (CC0) I believe, I don’t mind if you do.

Thanks for updating the license info. One thing that I find important is to have the possibility that a cancel operation blocks until the timer has really been cancelled. The same for cancelAll. With this approach it can be guaranteed that no async processing for the specified id is taking place afterwards. At the moment cancelled timers fire totally async to the caller. I would like to implement such behaviour by adding cancelSync() / cancelAllSync() to your timer code. I figure something like adding an extra semaphore and notify this in case a specific timer is cancelled or the timer… Read more »

I believe having synchronous cancels is problematic. You will need to be locking something while calling unknown code (the user handlers), and that’s always bad. It opens the possibility to cause all kind of problems (e.g: deadlocks) and edge cases. When in doubt, I prefer to have the API give a small set of strong guarantees (preferably without “except when…” cases) and pass responsibility of the rest to the user code. If you look at the *checkWork* function, you’ll notice I’m temporarily unlocking to call the handler, so that I don’t call unknown code while locking. Nevertheless, I’m not saying… Read more »

Thanks for confirming the bug. Concerning the synchronous design: I see your point with potential race conditions if one uses another set of semaphores. But if one would introduce cancellation methods that cause the timers not to fire anymore, there would not be any race condition. This can be easily done by setting the appropriate id and handler to 0 and let the timer thread ignore all those timers. Is there a particular reason why you want to guarantee to fire a timer even after cancellation ? I think the user could benefit in having the choice to either cancel… Read more »

Hi Daniel, Sorry for the long delay. Busy weekend with the family. When you mentioned “a cancel operation blocks until the timer has really been cancelled” in the previous comment, it seemed to me you meant having the entire thing locked AND also call the timers as cancelled. Didn’t realize you meant skipping firing the timer as cancelled. Might be ok. From the top of my head, I can’t think of anything obviously wrong with that. I’m using this code in one of our internal products at Cloudgine, and if memory serves me right, I pondered the same thing as… Read more »

I think by solving this issue in the cancel, another bug was introduced. Since the handler of that item is a nullptr, it’s end won’t be reset by cancelAll, and the queue won’t be empty (leading to the assert at the end of run being false)

Welcome to the blog, Patrick. I see. Indeed it is a bug. 🙂 But not new. It’s been there from the beginning. Behaviour was still correct for the entire lifetime of the TimerQueue What the *cancelAll* does is set all timers for immediate execution. That bug leaves timers that where previously cancelled with *cancel* untouched (not for immediate execution). Since *handler* is empty for those as a result of *cancel*, they will be ignored as they are pulled out by the worker thread, so behaviour is still correct. The bug will only show itself if destroying the TimerQueue before the… Read more »

Hi Pawell,
Thanks for the patch. I’ll take a look by the end of the week, and I’ll get back to you with feedback.