If you ever used Boost Asio, certainly you used or at least looked at strands .

The main benefit of using strands is to simplify your code, since handlers that go through a strand don’t need explicit synchronization. A strand guarantees that no two handlers execute concurrently.

If you use just one IO thread (or in Boost terms, just one thread calling io_service::run), then you don’t need synchronization anyway. That is already an implicit strand.
But the moment you want to ramp up and have more IO threads, you need to either deal with explicit synchronization for your handlers, or use strands.

Explicitly synchronizing your handlers is certainly possible, but you will be unnecessarily introducing complexity to your code which will certainly lead to bugs. One other effect of explicit handler synchronization is that unless you think really hard, you’ll very likely introduce unnecessary blocking.

Strands work by introducing another layer between your application code and the handler execution. Instead of having the worker threads directly execute your handlers, those handlers are queued in a strand. The strand then has control over when executing the handlers so that all guarantees can be met.

One way you can think about is like this: 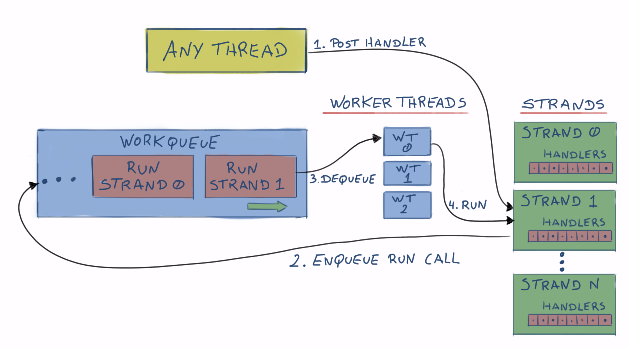 To visually demonstrate what happens with the IO threads and handlers, I’ve used Remotery .

The code used emulates 4 worker threads, and 8 connections. Handlers (aka work items) with a random workload of [5ms,15ms] for a random connection are placed in the worker queue. In practice, you would not have this threads/connections ratio or handler workload, but it makes it easier to demonstrate the problem. Also, I’m not using Boost Asio at all. It’s a custom strand implementation to explore the topic.

So, a view into the worker threads:

Conn N are our connection objects (or any object doing work in our worker threads for that matter). Each has a distinct colour. All good on the surface as you can see. Now lets look at what each Conn object is actually doing with its time slice.

What is happening is the worker queue and worker threads are oblivious to what its handlers do (as expected), so the worker threads will happily dequeue work as it comes. One thread tries to execute work for a given Conn object which is already being used in another worker thread, so it has to block.
In this scenario, ~19% of total time is wasted with blocking or other overhead. In other words, only ~81% of the worker thread’s time is spent doing actual work:

NOTE: The overhead was measured by subtracting actual work time from the total worker thread’s time. So it accounts for explicit synchronization in the handlers and any work/synchronization done internally by the worker queue/threads.

Lets see how it looks like if we use strands to serialize work for our Conn objects:

Very little time is wasted with internal work or synchronization.

Another possible small benefit with this scenario is better CPU cache utilization. Worker threads will tend to execute a few handlers for a given Conn object before grabbing another Conn object.

Zoomed out, without strands

Zoomed out, with strands

I suspect in practice you will not end up with handlers biased like that, but since it’s a freebie that required no extra work, it’s welcome.

As a exercise, I coded my own strand implementation. Probably not production ready, but I’d say it’s good enough to experiment with.

First, lets think about what a strand should and should not guarantee, and what that means for the implementation:

Putting aside synchronization for now, we can draft the behavior of those 3 methods. Overall, it’s quite straightforward. 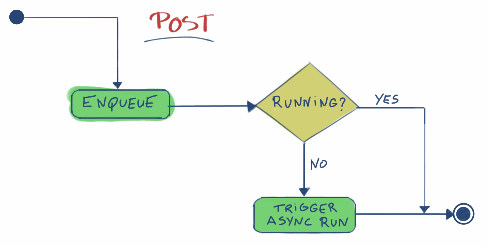 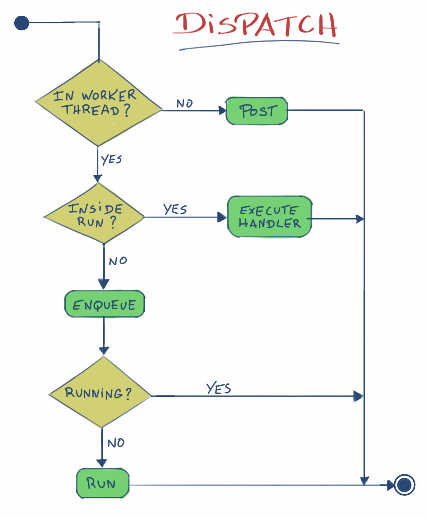 For the actual source code, we need two helper classes I introduced earlier:

There is also Monitor<T> , which allows you to enforce synchronization when accessing a given object of type T. You can learn more about it at https://channel9.msdn.com/Shows/Going+Deep/C-and-Beyond-2012-Herb-Sutter-Concurrency-and-Parallelism at around minute 39 , but here it is the implementation I’ll be using:

The strand implementation is pretty much what you see in the diagrams above, but with the required internal synchronization. Heavily documented to explain what’s going on.

Note that Strand is templated. You need to specify a suitable Processor type. This was mostly to allow me to share the code as-is, without more dependencies.

Another peculiar thing to note is that the strand doesn’t use the Processor to execute handlers, as mentioned in the beginning. It uses it to trigger execution of its own run method.

A simple useless sample demonstrating how it can be used.

I don’t see any obvious downside of using explicit strands, unless you stick with just one worker thread (which is an implicit strand on its own).

The source code in this article is licensed under the CC0 license, so feel free to copy, modify, share, do whatever you want with it.
No attribution is required, but I’ll be happy if you do.

first of all – thank you for interesting article .
is it possible for you to publish a sources of your example, including remotery calls inside your code?

Thanks for the article, much easier to read than code in asio.
Instead of using CallStack and data.running you could simply have something like std::optional where std::nullopt would mean the strand is not running, while the value would be used in runningInThisThread().

Hi Mikhail,
Glad you enjoyed it.
It’s been a while since I had to look at this code and I’m a bit sleep deprived today (hard to think).
But from your comment, it seems that maybe you missed why that “CallStack” is needed ?
Have you read the other article? http://www.crazygaze.com/blog/2016/03/11/callstack-markers-boostasiodetailcall_stack/

It explains the problems that class solves, and therefore why Asio also uses it.

Let me know your conclusion. If you still don’t think Callstack is needed, I’ll have to look at it another day with a fresh brain (after sleeping).

0
Reply
Support me for more articles