Lately I have been refactoring czPlayer to add more features and make future maintenance easier.
Some parts of the code are almost 10 years old, when I first started playing with sound coding.
Needless to say, my code style and quality has improved a lot in 10 years, and it’s a funny thing to look at code this old. 🙂
As I was refactoring the code, I found a lot of ambiguities and redundancies caused by member variables added over time.
Let me explain….
I had a class responsible for MOD processing, and some of the member variables were:

What’s the problem with this approach ?
Let’s see…
Suppose I want to call methods on the MOD object (e.g: Pause(), Resume(), etc)
I need to make some checks in each method.

When the MOD finishes playing, I needed something like this…

And similar things when playing, stopping, etc.
See the problems?

Now look at the meaning of the variables. They are mostly mutually exclusive.

The more data members a class has, the harder it gets to keep the object in a valid state, so, the less data to manage, the better. Less maintenance and less bugs.

One technique I use a lot when trying to simplify code is to look at it with state diagrams whenever possible.
Here it is what happens (kind of) with instances of the MODModule class: 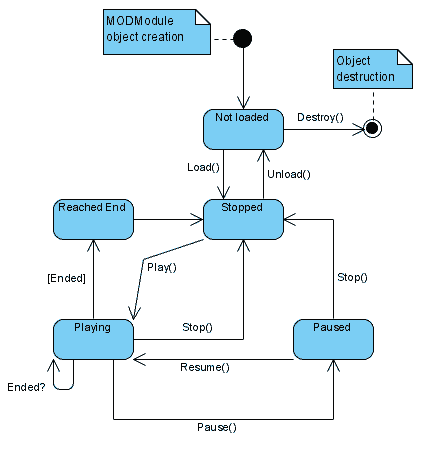 I can easily translate it to code with enums.

This approach is a lot easier to maintain, and less error prone.
Now the code in most functions become something like this:

The code may look similar, but it’s a lot less error prone, easier to follow and maintain.
Looking at the State Diagram, I could easily squeeze in a “Fading” state and understand the conditions to enter or leave that state.

As a bonus, using enums will enforce more rules and help you out with errors the compiler might catch. Always prefer compile-time errors over run-time errors. 😉